Research professor Kate Canales believes design is crucial to disrupting higher education, and the timing has never been better.

Doreen Lorenzo: How did you end up where you are today? Did you go directly to academia or did you jump into design first?
Kate Canales: I started my early professional career at Ideo, right out of college. I grew up there over eight years. As a designer, Ideo is my hometown. Then after a couple of years working freelance, I joined frog design in Austin as a principal designer and then a creative director. In 2012 I joined SMU. Although that turn looks a little abrupt, in my heart it really made sense. I had been evolving to support work that did not just deliver great design to clients, but helped clients become more design-led. When SMU called and asked me to help them develop a design program, it was something that made a lot of sense to me. It felt like a natural progression. 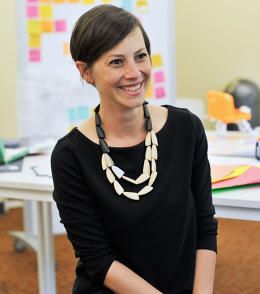 [Photo: Jessica Garmon]
Did you go to school for design?
My degree is in mechanical engineering, but I pursued a minor in studio art. Truly, I didn’t feel stirred by either one of those independently, but in the place where those two things overlapped I found a lot of fulfillment. That was design.
As an industry, higher education is going to shift, and design will play a major role in that shift.
Let’s talk about this phenomenon that’s called design thinking. Why is it so important?
In our program at SMU, we’ve chosen to use the term human-centered design, which overlaps dramatically with what people mean when they say design thinking.
Design thinking emerged as a topic when we all started applying design methodology to problems that hadn’t traditionally presented themselves as design problems. For instance, using design as a problem-solving framework to understand how students might interact more effectively with online courses. That kind of problem might not have looked like a design problem previously. What we’ve learned is that design pairs really well with other ways of working.
So how do we keep design thinking from becoming a fad?
Because the fundamentals of design thinking are so straightforward and intuitive, I worry that we may have miscommunicated how simple it is. In fact, it is much more nuanced in practice. This is especially true if you’re trying to adjust an entire organizational culture to work in these new ways.
What I see happening is people taking a weekend class in design thinking and then believing that’s all they need. They go back to their organizations and are under-supported. If their initiative with design thinking fails, they think that design on the whole failed. I love these quick courses because they are good for inspiring people, but they aren’t enough to build expertise.
This is a huge part of why we started MADI, the Masters degree in Design and Innovation at SMU. We’re trying to produce masters, so employers can use real expertise to lead and extend the work they’ve begun with short courses and other design thinking catalysts. 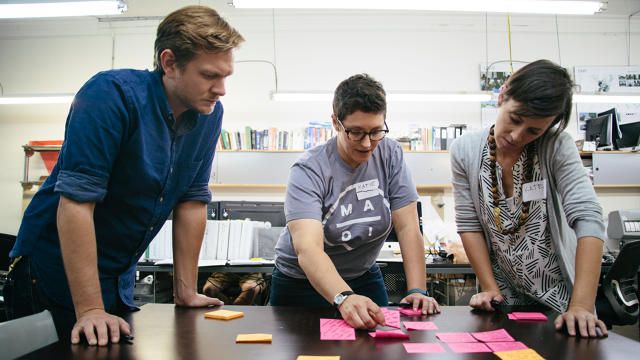 [Photo: Eva Cruz]
I want to talk about how design thinking is being applied to higher ed. Why is it happening now and how do you think it’s working?
Design is poised to make a huge impact in higher ed. There are two ways this can happen—first, as a tool for students’ learning. There’s so much talk about preparing students to solve problems that the world can’t yet imagine, but how are we going to do that? Design is a wonderful framework for promoting the skills that leaders and innovators need, including things like empathy, collaboration, persisting through failure, and comfort with ambiguity. So that’s one way.
The second way is as a disruptive force. To me, an industry is ready to be disrupted when one of three things happens: it outgrows its business model; its offer is no longer appealing to its customer base; or technology has pushed it out of relevance. All three of those things are happening in higher ed right now.
As an industry, higher ed is going to shift, either from the inside or the outside. Probably both. I believe design will play a major role in that shift.
The thing that’s most exciting is that design, in particular human-centered design, is an amazing framework for learning and guiding problem-solving.
But let’s face it, this is a big change in education. It’s bringing people from private industry like you into a university setting. Do you think we’ll see more of that happening in higher ed?
I think that we will have to if there is further commitment to design. As higher ed tries to innovate, it will have to look at how people who acquired their expertise outside of the academic system might provide value inside of it.
I think most designers are going to fall into that category. We’re seeing this at every school currently pursuing this trend, from SMU to Stanford, from University of Vermont to the Claremont Colleges. The people leading those learning experiences—including me—are not traditional academics. If higher ed is going to embrace design, it’s going to simultaneously embrace a new way of looking at who guides the learning experiences.
I agree. Talk a little bit about the program. What was it like starting it from scratch and what advice would you give to someone starting a similar program?
I think because I’m a designer I approached the whole thing as a design problem. Like when you’re a hammer, everything’s a nail. I just walked in and said, 'Oh, it’s a design problem.'
I’d recommend doing that, which means going through multiple cycles of learning about the people in the system that you’re designing for, and then building prototypes for them to try. I started by co-teaching a couple of existing courses in the engineering school. That helped me get to know the student base and faculty members and start to understand some of the norms. Then I started designing my own courses. Then those eventually became the basis of the degree. 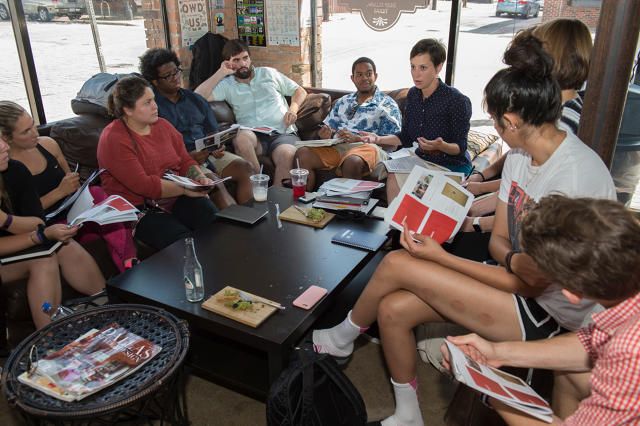 [Photo: SMU]
So what did you learn? What were some of the assumptions you had starting your program versus what ended up working?
The big thing that I’ve learned is about scaffolding. It isn’t enough to show a bunch of case studies of great work, and then say, 'Okay, go do that.' I’m learning how to scaffold the steps so that students aren’t daunted by the openendedness of what we’re trying to do. That has been my number one tool that I’ve developed as an educator.
The other main thing that has aided me is having a wide berth in which to make mistakes and learn. That is one of the conditions that innovation requires — you have to expect that you’re going to get things wrong, and that you’re going to iterate on those things. That’s a kind of mantra at SMU Lyle, and I’m lucky that I’m operating under leadership that understands that we’ve got to learn our way into the right solution, just like any design problem.
People often think that design thinking itself is a career. How do you think about design thinking as a profession?
I don’t think that human-centered design or design thinking is a standalone profession. What we’re trying to emphasize is human-centered design as an additional skill set you can bring to the table in conjunction with what you’re already good at.
The process of human-centered design itself allows people to modulate their thinking in a way that’s really powerful. The process ensures that you’re both making and understanding, and in fact, that you are making in order to understand, and understanding in order to make. Those are two things that feed off of each other. But what you make is beautifully open for interpretation. You can use human-centered design to make furniture or buildings, sure. But you can also use it to make policy or curricula or systems or services—which is why it doesn’t stand alone.
So what does design mean to you and how do you think it’s changed over time?
Design is the lens that I use for looking at the world. And it’s really my core way of working. When I took my first class in visual thinking in college, I collided with a way of being in the world that was like the first pair of glasses I ever got. Everything was clear. One of the things that’s been so delightful over time, and that really fires me up about the work I’m doing now, is facilitating that same collision for other people.
Are you a hugger?
Absolutely.
Source: Co.Design. Fast Company
Kate Canales is a research professor and Director of Design and Innovation Programs at the Lyle School of Engineering at SMU in Dallas. She spoke to Doreen Lorenzo as part of Co.Design's Designing Women, a series of interviews with inspiring women in the design industry.
comments powered by Disqus