GGRC provides services and financial support to people with developmental disabilities in the San Francisco Bay Area. But for parents of children with disabilities, navigating the long and sometimes bewildering bureaucratic process required to get such services often challenges their patience and persistence. Before GGRC can determine which services, if any, are best for a child, staffers conduct a thorough assessment that entails meetings with parents, home visits by social workers, and evaluations by medical professionals including speech pathologists, psychologists, and nurses.

Elizabeth and Saul learned that these assessments usually take three months or more and that parents have to drag their children to a daunting series of meetings and examinations in unfamiliar new places, which distresses the children and leads many parents to abandon the process. Although GGRC’s staff often develop great empathy for individual clients, going to heroic lengths to help clients navigate the administrative maze, the system was not designed to make life easy for clients or staff members.

Elizabeth and Saul pulled up in that Winnebago to invite those eight staffers to participate in an experiment. The plan was to meet with potential clients in the neighborhoods where they live. The GGRC team would assess each family’s needs and decide if they qualified for assistance right then and there.

That day, they did nine assessments in less than two hours.

The Winnebago experiment wasn’t something that GGRC was ready to sustain and scale up. It was too expensive, for one thing. But the exercise wasn’t really about the Winnebago; it was about pushing beyond what was comfortable, taking a different point of view, trying something new, experimenting, and discovering what to try next. It was part of a larger effort by GGRC staffers to rethink what was possible for their clients and themselves.

In 2013, GGRC began working with the Hasso Plattner Institute of Design at Stanford University (which everyone calls the "Stanford d.school") to learn the basics of design thinking, a hands-on approach that focuses on developing empathy for others, generating ideas quickly, and testing rough "prototypes" that, although always incomplete or often impractical, fuel rapid learning for teams and organizations.

Working with Elizabeth, Saul, and a former GGRC staffer who understood both the client and staff perspective because he had an autistic child, GGRC created a detailed map of the assessment process. The group used color-coded Post-its to identify each step and the emotions that clients usually felt, starting with parents’ initial contact with GGRC and ending with the day they (finally) began to receive services. Constructing this "process map" helped GGRC staffers realize that they were not attuned to numerous, unpredictable, frustrating waiting periods.

GGRC staff members also discovered that while they each knew their own responsibilities, they didn’t know much about what other colleagues did or how their work meshed with the overall process.

No single stage felt broken from the vantage point of individual staffers. But when the complete journey was framed from intertwined perspectives of the client and all GGRC staffers, it was painfully obvious that there were big opportunities for improvement.

Courtesy of Robert I. Sutton

Elizabeth and Saul facilitated GGRC brainstorming sessions about how to improve the process. At one point, Elizabeth and Saul encouraged staffers to generate a list of absurd ideas; one GGRC leader joked that it would be nice if they could all go into the community in a Winnebago to bring GGRC services to where clients live.

Design thinking entails a bias toward action. In that spirit, Elizabeth and Saul pushed forward with the Winnebago rental.

After interviewing clients in the Winnebago that day, it took staffers another week of concentrated work at the GGRC office to finish processing the assessments and begin serving these families. But that was 10 weeks faster than usual, and they had learned valuable lessons about how they could improve the process for all clients. 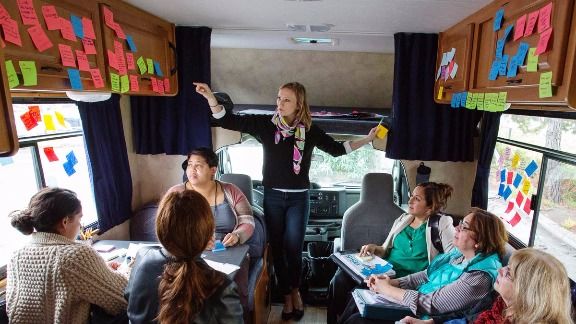 Courtesy of Robert I. Sutton

Bringing everyone into the same "room" led to a drastic reduction in waiting times. Families could see everyone in one session, without going to a strange environment, which eased their frustration and stress and helped disabled family members receive services much sooner. GGRC staffers learned a great deal about the work that their colleagues did, how to better support each other’s work, and how to work better as a team. The members of a complex and vital human chain could now look one another in the eye, discuss each case from different angles, and make better decisions. That opportunity had never existed before.

GGRC is now brainstorming improvement ideas and figuring out ways to prototype them on a regular basis. They’ve learned that it’s not about one idea (the Winnebago); it’s about the process of continuous improvement.

Several prototypes inspired by that day on the Winnebago have been launched or will be soon. The first created a dedicated assessment team, which focuses on redesigning numerous steps in the assessment process. The team’s goal is to process each application in no more than 45 days — a 50% reduction. A second is called "Hybrid Social Worker 2.0." This prototype untethers social workers from their desks so they can spend more time with the families they serve. The GGRC is experimenting with tablets, new software, and new procedures that will allow social workers to complete their assessments in the field, which will make the process feel better and move faster for families.

A third prototype, tested this year, focused on families that need GGRC services but have not applied for them. The idea was sparked by interviews that GGRC staff had with families who didn’t know they were eligible or were concerned the application process would be difficult and distressing. The staff realized that, as GGRC head Lisa Rosene explained, "We must meet families where they are, both physically and emotionally." The resulting prototypes were "open houses," held right in the communities where eligible families live.

We are taken with the GGRC story because beyond the improvements for clients and the pride that staff members feel about the changes they’ve made, it offers three key lessons for other leaders and teams who are determined to make their organizations "Better by Design."

First, your organization probably looks a lot different through your clients’ and customers’ eyes than it does through employees’ and leaders’. Anything you can do to gain empathy for what it feels like to deal with your practices and people can help you design a more humane, respectful, efficient organization.

Second, focus on ways that people in specialized roles and silos are blinded to how their work meshes with the larger system. Look for broken practices and bad habits that unwittingly create bottlenecks and bad handoffs between well-meaning people. And keep asking them, their colleagues, and clients whether they have key information they aren’t passing along that would speed the process and ease clients’ frustrations. Once people better understand how their learning and role fits into the big picture, it is a lot easier for them shift from being part of the problem to part of the solution.

Third, at the d.school, our goal is to teach people to "get comfortable with feeling uncomfortable." We’ve learned that enticing leaders and teams to try impractical things that make them squirm a bit, such as the day spent in the Winnebago, can help them see what they do from another vantage point. And when you can find ways to see the same old thing in a different way, you can find solutions to obstacles that once seemed insurmountable.

The fourth and final lesson is that change takes courage, and if you can give people just a bit of encouragement, it is remarkable how brave they can be.

Elizabeth and Saul’s GGRC project was completed for a d.school class called d.leadership: Design Leadership In Context, where a dozen or so pairs of Stanford students each year work with an external "client" to help them apply design thinking to solve thorny problems. The class is taught by Perry Klebahn, Kathryn Segovia, Bob Sutton, and Jeremy Utley.